How to Predetermine the Sex of Cannabis Plants | PotGuide.com

Identifying the sex of a cannabis plant as early as possible is a critical skill when growing plants from seed. If you are growing to harvest your own bud, then not only are males useless as they do not grow smokable flower, but they also pose a threat to your female plants by pollination.

Note: while cannabis plants are capable of hermaphroditism — when a female plant produces its own pollen — this is most often the result of external stress or modulation. This article will focus solely on identifying the initial presenting sex of the plant.

Like most living things on this planet, cannabis plants come in one of two sexes, male and female. Male plants produce pollen which carries their DNA to female plants who receive the pollen and begin to grow seeds.

Male pollen is produced in pollen sacks that grow like clusters of grapes. Eventually, these sacks burst and pollen is released, where it floats on the wind searching for a female plant. 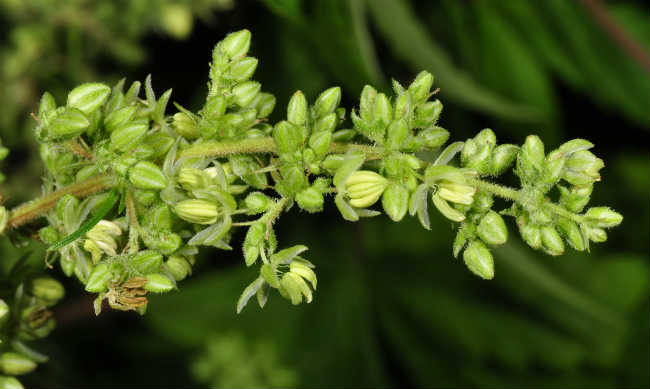 Example of a male cannabis plant.

Where male plants grow pollen sacks, female plants will grow a calyx, which contains an ovum that could be pollinated. From the calyx, the female plant will produce fine hairs called “stigma,” and these stigma are adapted to receive pollen.

Once these stigma catch pollen from the air, the plant has been “impregnated,” and the plant’s metabolic energy is directed toward seed production, rather than flower production. The flowers that do grow, then, are smaller, less potent, and full of seeds.

How to Determine a Cannabis Plant’s Sex

A cannabis plant’s life exists largely in two stages: the vegetative stage, and the flowering stage. The vegetative stage is first, when the plant is aggressively growing stalks and leaves, and it is this stage when you will determine the sex of your plant.

Sex structures can begin to show in as few as 14 days, but the average is longer. Keep an eye out beginning the second week of the growing process, and you should catch them as they start coming in.

The plant’s sex organs will grow in the “nodes,” or the corners where the leafy stems emerge from the stalk. But sex organs will not grow from every node, so be sure to examine your plant thoroughly each day. 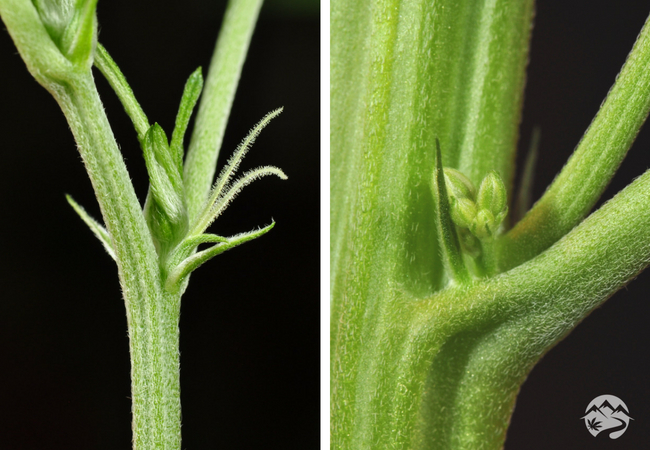 The male pollen sacks will grow in small bulbous clusters sometimes described as “crab claws.” They may not release pollen for a few more weeks, so you have a small, forgiving window if you miss one. However, the plant material is soft, and a slip of the finger or bump of a tool could puncture or tear them, releasing the pollen inside.

Thus, it is best to identify males as soon as possible and, if you are growing to harvest, remove them from the grow area, and probably from the property. Researchers at Michigan State University have shown that cannabis pollen can carry more than ten miles.

The nodes of female cannabis plants generally emerge later, first presenting a calyx. This is a “pre-flower,” and some growers recognize this “pre-flowering stage” between vegetative and full flowering. The calyx serves as a small sheath containing an ovum. If the plant were to be pollinated, this is where the first seeds would start being produced. 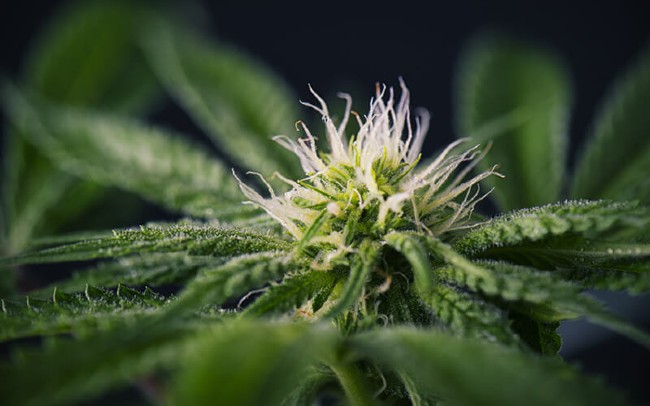 An example of stigmas on a female cannabis plant. photo credit

Eventually, wispy white stigma will emerge, holding a hand to the air, hoping to catch some pollen. Once the stigmas are visible, the female plant is mature enough to be pollinated, so make sure any males are far away, or sealed up someplace tight and sanitary

Predetermining the Sex of a Cannabis Plant

If you need to shave a few weeks off the process, photoperiod manipulation combined with cloning may be used to “force sex” a plant. Begin by cutting and potting a suitable clone from the plant. Once it is established and healthy, put the clone under a 12/12 light cycle. This will induce the flowering stage, even in its infancy, and reveal stigmas or pollen sacks. Since this is the same DNA as the plant it was cut from, this reveals the gender of the source plant.

Knowing how to sex a plant is important for both breeders and home-growers hoping to harvest their own bud.

Begin scouting for sex organs after the first two weeks of the plant’s life. They will grow from the intersection where the stems grow out from the stalk, called “nodes.” Male plants will produce pollen sacks that look like grapes or balls, and females will produce thin, wispy hairs called stigma.

Once the female’s stigmas have emerged, the plant is mature enough to be pollinated. Any pollen they receive after that point will “impregnate” the plant. After a female plant has been pollinated, flower production is sacrificed for seed production, effectively ruining your harvest. Fertilized cannabis flowers are smaller, less potent, and full of seeds.

To avoid this whole ordeal, some growers purchase feminized seeds: seeds that are guaranteed to produce a female plant.

How have you determined the sex of your plants? Share your wisdom in the comments below!