Can You Determine Indica, Sativa, and Hybrid Strains by Smell? | PotGuide.com

You’re walking out of the dispensary with your friend and it’s time for one of the best parts of the weed-buying experience.

Opening the bag, you stick your nose in deep and inhale like you’re a hungry cartoon character who’s downwind of a cooling pie on a windowsill. The way those terpenes combine into such a rich universe of scents is magical every time: fresh pine, sweet berries, funky cheese, sharp chocolate, diesel, tropical pineapple, lavender perfume, and more. Like that cartoon character, you feel like you’re floating.

“You know,” Your friend decides to brag “I can tell whether it’s an indica or sativa just by the smell.”

“No way,” You reply. But now you’re a little curious.

Your friend isn’t alone in making this claim. Some consumers —  from Cannabis Cup judges to your average proud stoner — have been bragging for a long time that just a whiff of something sweet and fruity means that bud can only be a sativa. If it’s grassy and earthy, it’s an indica without a doubt.

As far as the science goes, this question falls into that wide chasm of “hasn’t been seriously researched yet due to the federal prohibition on cannabis.” While this study would no doubt have plenty of willing participants, and the scientists would be really cool for running it, we’re probably a long way off from ever locking this answer definitively down.

Although, speaking of science, this question gets even murkier as there is a growing debate on whether or not the distinction between the effects of indica and sativa is even real anymore. 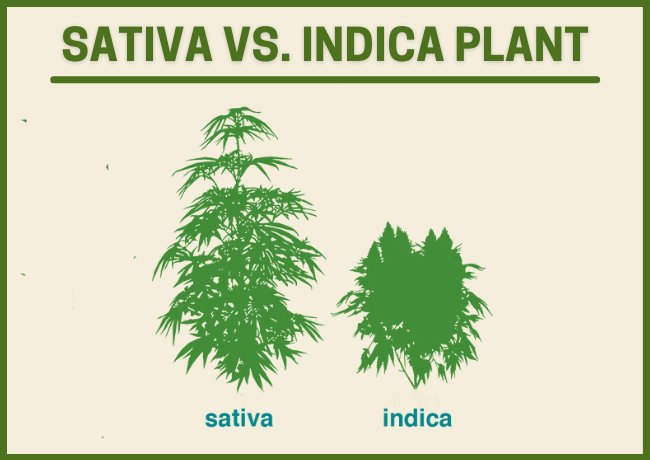 There is no argument that the plants appear different. Indicas are short, squat, and come from Central Asian countries such as Pakistan and Afghanistan. Sativas are taller, thinner, and come from tropical regions such as Mexico and Hawaii. Indicas grow dense buds beneath broad leaves.

When it comes to effects, however, some researchers are beginning to push back against the whole “sativa for  the head, indica for the bed” trope. These seem to have more to do with the terpenes and cannabinoids in each strain — and how they interact with each consumer — rather than just what the plant they came from looks like.

With that in mind, let’s talk about terpenes, the essential oils produced by each cannabis plant which are partially responsible for each strain’s effects.

Sativa plants tend to produce terpenes such as pinene and limonene. Pinene smells citrusy and crisp, which is what makes some weed smell like a northwestern forest. This terpene in isolation has been linked to alertness and memory retention. Limonene, which makes your plant smell like fresh lemons, is linked to elevating mood. 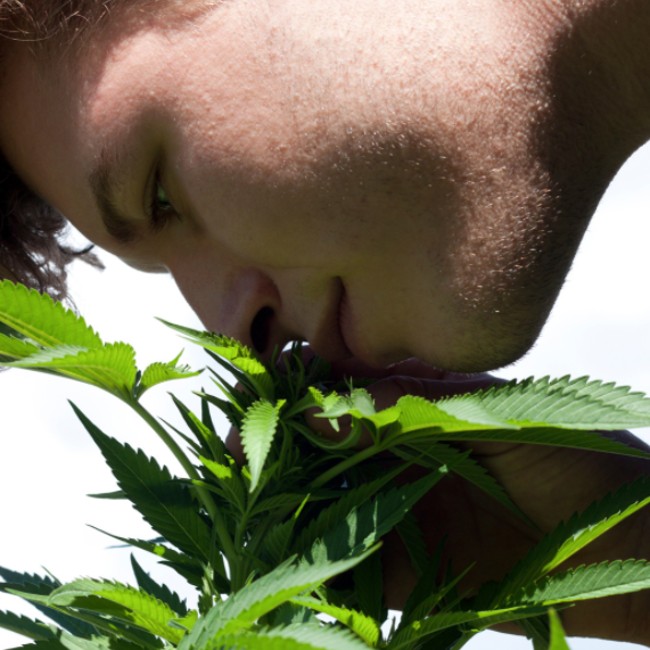 The various smells of cannabis are influenced by its terpene contents. photo credit

Indica plants, on the other hand, tend to produce terpenes such as caryophyllene and linalool.

Caryophyllene smells woodsy, peppery, and is linked to pain relief. Linalool, which gives many indicas their perfumey, lavender smells, is linked to calming and relaxing effects.

Of course, this is a brief overview of some of the 100 identified terpenes that have been discovered in cannabis at present, but so far your friend seems right. If the bud in your exit bag smells like lemon fresh Pine-sol, get ready for a fun night out. If it smells like a potpourri basket, save it for a comfy night in.

You can tell your friend to hold on, because where this starts to get complicated is with terpenes such as Myrcene.

Myrcene is peppery, smells a bit like cloves, and is produced by both indica and sativa strains. In fact, it’s the most commonly occurring terpene on all cannabis.  It’s been linked to the relaxing, couch-lock feelings that are stereotypically indica effects. It also has been shown to lower the resistance of the blood-brain barrier, allowing for more cannabinoids to access the CB1 receptors. This means an even greater psychoactive effect, which most people would say is a sativa effect. In essence, it has both sativa and indica effects.

Thus, if your strain smells strongly of clove cigarettes, it means the effects of the myrcene could go either way, depending on what other cannabinoids and terpenes are in there. If the second strongest smell is a diesel odor, then maybe you’ll have a supercharged sativa experience. If you catch some hints of flowery perfume, say hello to your couch or bed because you might not be leaving it for a while. 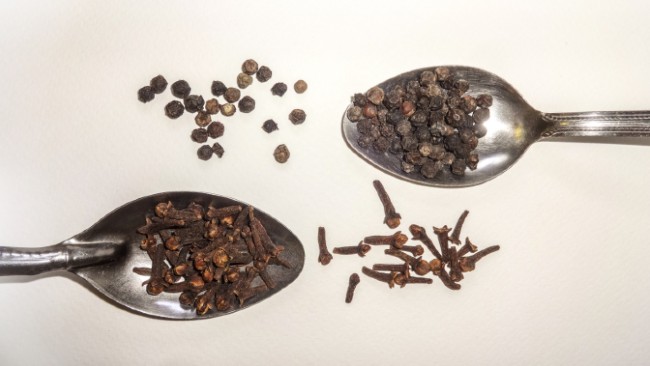 The smell of cloves and pepper could be linked to either a sativa or an indica. photo credit

Making it even more complicated, thanks to generations of interbreeding from the original heirloom strains, there are a mix of terpenes in every strain. You’ll find limonene in the clearly indica Bubba Kush as well as the widely known sativa Sour Diesel. You’ll find pinene in the legendary sativa Jack Herer as well as the out-of-this-world indica of Romulan.

It all depends on the percentages of each terpene in the strain, how they interact with each other, and even then it can be up to the brain chemistry of the person smoking it.

Even if a strain smells like a lemon factory exploded, the way the limonene terpene interacts in that strain with the other cannabinoids and terpenes once it hits your individual cannabinoid receptors — in what is commonly known as the “entourage effect” — could mean you’re yawning on your couch after your second puff rather than diving into this next adventure like you expected. Meanwhile, your friend who just smoked the same strain can kiss any thought of sleep goodbye.

So, if your friend or anyone else claims that they can tell if a strain is indica or sativa just by the smell, should you believe them? Sure, if it makes them feel special, why not play along? At this point, guessing whether the strain is indica or sativa means guessing whether the plant that the buds grew was spindly or squat. If they’re guessing the effects that consuming the bud will have, they have a better shot based on what terpenes are the most forward in the scents wafting off the plant.

However, even then, it’s all based on what most people have experienced from the strain. Because of the entourage effect, a supposed indica could leave you jazzed up and a supposedly sativa strain could put you out for the night. Though the effects might be the same for most people, that doesn’t guarantee they’ll be the same for you.

Your best bet is not to worry about indica, sativa, or any other designations.

The next time you’re in a dispensary, just ask for a whiff from the sample jars and, like Toucan Sam, follow your nose. If it smells good to you, it will probably treat you well. As many a budtender will tell you, “the nose knows.”

Can You Tell if a Strain is Indica or Sativa by Smelling It?

Maybe. In general, determining between indica vs sativa by smell is unlikely, however, you may be able to get a good idea of a strain’s effects based on its terpenes.

Do all Sativas and Indicas Have the Same Effects?

The indica vs sativa distinction is quickly becoming out of touch. In today’s understanding of cannabis, terpenes and a wide array of cannabinoids interacting with a person’s unique biochemistry will determine a strain’s effects.

Terpenes are the oils that plants produce that give them smell and various effects.

Is Myrcene in Indicas or Sativas?

Myrcene is the most prominent terpene on cannabis and appears on both sativa and indica strains.

Can you tell the difference between indica and sativa by smell?