Will Delta-10 THC Show Up on a Drug Test? | PotGuide.com


Like any maturing industry and market, the cannabis industry has responded to consumer demand with the availability of new and novel products. One such innovation is the arrival of delta-10 THC, a new cannabinoid with a wild (yet not fully confirmed) origin story.

While the story of delta-10’s arrival on the cannabis scene is still unfolding, curious consumers are eager to know if delta-10 will have the same effects that delta-9 THC (aka regular ole THC) does. So far, it’s been reported that delta-10 may bind more loosely to cannabinoid receptors throughout the body and may result in a less intense high.

But what about a drug test? At this point, the large majority of what we know about delta-10 relies on self-reporting, leaving many to wonder whether or not this new cannabinoid could cause you to fail a drug test, especially important to know for workers whose employment could hinge on a clean drug test. This is especially relevant given that delta-10 can be derived from CBD, a mostly legal cannabinoid, leaving one to believe – well, if it’s made from something legal, I can’t fail a drug test. Right?

What Are Cannabis Drug Tests Looking For?

Most cannabis drug panels require a urine sample because they are, at this point, the most convenient and affordable for the employer or agency. However, urine tests are not designed to look for particular cannabinoids like one of the deltas, but are instead looking for THC metabolites called THC-COOH.

Checking for metabolites is a big problem because they cannot detect a window of impairment, but can only detect whether you have consumed cannabis within the past few days to as long as a month or more.

The Mayo Clinic reports, “the metabolite of marijuana (THC-COOH) has a long half-life and can be detected in urine for more than 7 days after a single-use. The presence of THC-COOH in urine greater than 100.0 ng/mL indicates relatively recent use, probably within the past 7 days. Levels greater than 500.0 ng/mL suggest chronic and recent use. Chronic use causes accumulation of THC and THC-COOH in adipose tissue such that it is excreted into the urine for as long as 30 to 60 days from the time chronic use is halted.” 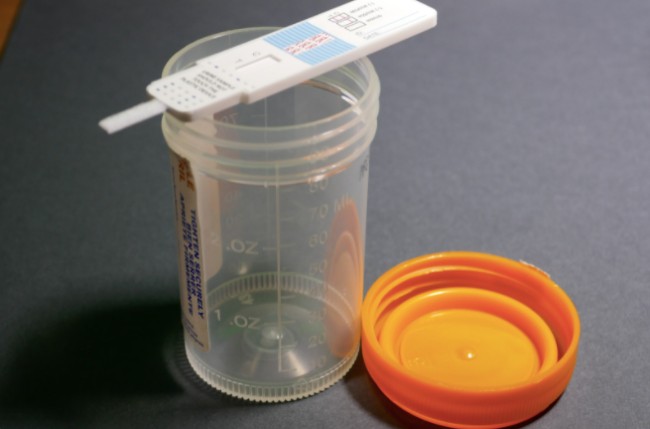 Urine tests are most commonly used when testing for cannabis. photo credit

Other types of cannabis testing, such as blood, hair or saliva tests are much less common and vary in accuracy. Hair follicle tests can detect cannabis usage up to 90 days, and saliva can detect usage from days 1-30. It is thought that blood tests may be the most accurate when determining a window of impairment because they test for THC itself, not its metabolites. But none of these methods outside of urine testing are commonly used.

Will Delta-10 THC Show Up on a Drug Test?

Since these tests are on the hunt for either inactive metabolites or THC, go ahead and assume that your body will metabolize and store delta-10 the same way that it does delta-9. In other words, prepare for delta 10 THC to show up on a drug panel and plan accordingly.

Cannabis reform organizations such as NORML strongly oppose cannabis testing as a condition of employment, and some companies like Amazon have decided to ditch testing for cannabis metabolites unless the role is regulated by the U.S. Department of Transportation. While Amazon is a little late to the cannabis reform party, industry insiders are hoping that other companies will soon follow Amazon’s lead.

In the meanwhile, if you know you must take a drug panel in the near future, the only sure way to sail through with flying colors is to not consume cannabis for a period of time that will greatly depend on your consumption frequency. If a drug test comes up by surprise, you’ll want to get started as soon as possible on flushing marijuana out of your system. We make no promises, but it can’t hurt to try.

Have you failed a drug test from Delta-10 THC? Share your experiences in the comments.

CBD Cosmetics: What to Look For | PotGuide.com

Does Consuming Cannabis on an Empty Stomach Make You Higher? | PotGuide.com

Are You Losing THC? Cannabinoid Loss is Real. | 710 Morning…

Is CBD the Secret Ingredient ?